How can we help you today?

The Excel Export/Import tool can be used to automate importing media into ImageVault 4+ by supplying data in an Excel document. The data supported is target vault, categories and metadata.

The application supports aborting/resuming by tracking processed files and can limit the number of files processed for testing purposes. All progress is logged on file and in the application window.

It can also be used for Metadata export/import functions where the media assets can be exported to an excel file. This file can then be edited to allow changing details for the media assets like

Excel file formats for Excel 2013 and later are supported. 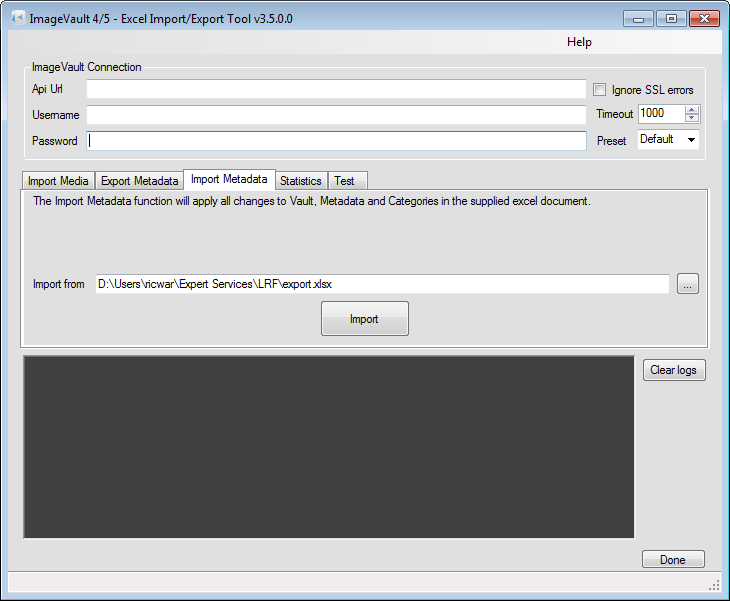 Links to this help page.

In these boxes, you fill in the details on how to connect to ImageVault.

Here you enter the client identity for the system. Normally this is iv4sdk. Is also found in imagevault.client.config for any existing client application.

Here you enter the password for the client identity. This password is created during the installation/setup of ImageVault. Is also found in imagevault.client.config for any existing client application.

If the api uses SSL (https) and you experience SSL errors you can check this box to ignore those errors and continue anyway.

Indicates the number of seconds to wait for an operation to the ImageVault server to complete.Will abort the operation if the timeout is exceeded.

Dropdown list for selecting the desired preset to use for Excel import/export. The presets are defined in json-format and descides which metadata to include in the process. The default preset selects all user-defined metadata. For more information about how to make a customized preset, please issue a support ticket.

Throughout the import progress logs will be written to the dark grey log window and to a logfile (ImageVaultImporterLog.txt). The log will give information on the progress and if any errors occurs. You can clear the log window by clicking the Clear logs button.

This tab will allow you to supply an excel file of a specific format (see the Excel Import Sheet below) where media will be imported and uploaded to the system.

Limit number of files to process

You can choose to limit the number of files to process by setting this value.

Note: It is highly recommended to start with a small number and verify the result in the ImageVault UI before running larger operations.

Each processed file will be appended to a history file, "processed_files.txt". If the import job is run multiple times, and this file is present with processed items in it, they will be ignored.

This means that you can run the tool multiple times without adding duplicate files, as long as the history file is not removed in between runs.

You run the import job with a file limit of five files. The application will add these five files to "processed_files.txt". After importing you check the ImageVault UI to make sure that the media items look as expected with regards to categories, metadata etc. Now you want to continue running the import job on, say, another 100 files. You do not need to modify the Excel document but instead just run the job again. As long as the "processed_files.txt" exist, with the previous five files, they will be skipped and the progress will be resumed on the sixth file.

This is also useful if an error would be encountered half way through an import job, e.g. if the network goes down. You can simply run the job again and the application will skip any processed files to prevent duplicates.

Note: This also means that if you want to completely restart an import job from file one you need to manually delete this file.

When all options have been set, click the Import button to start the import progress.

The export metadata will create an excel file containing all assets found on a system. Specify the output file and optionally paging information for retrieving part of the assets. It is also possible to filter the assets by vault id, simply state the id (or ids) in the Vault ids-field. If you like to download the original media files along with the metadata, you can do so by checking the Include Original Media checkbox. You will be able to select the target path during the export process.

The exported file differs from the Import Media file since it only contains metadata.

The color of each column indicates what fields you can change for the import. Yellow are not changeable, green and red are.  Green represents user metadata and red other changeable information.

This contains the id of the asset.

This contains the current version id of the asset (Versions were introduced in ImageVault v5.1 and will be 0 for older installations).

Name (filename) of the asset

Date when the asset was uploaded

The user who performed the upload

The size in bytes of the original file

The width of the asset in pixels.

The height of the asset in pixels.

The name of the vault where the asset is located

The categories selected for the assets separated by semicolon (;)

The metadata available for each asset. The included metadata is descided by the selected preset.

Using the exported metadata excel file, you can modify the metadata and use the import function to apply those changes to the system.

Note: No published media assets will be affected. Those url:s will continue to work as before.

The following modifications are supported.

You can change the name of an asset. This is the same as changing it in the organize view. This value is required and cannot be left blank.

You can change in which vault that the asset should be stored in. If you enter a name to a vault that doesn't exist, a new vault is created for you (this newly created vault have no access rights, only admins can access items inside them).

Categories can be set according to the Categories described in the "Excel Import sheet" below.

Each user metadata has it's own column. Edit the value accordingly. Note that if you enter an invalid value, the import will complain, show a warning and skip that asset when importing. If you add more metadata columns (all columns with a name right to the Categories column are treated as metadata columns), these metadata definitions will be created for you.

If you remove metadata columns (right of the Categories column), these will be ignored by the import, no changes will be made to those metadata values.

You can remove all columns except Id, Name, Vault and Categories. They need to be kept in that order.

You can add columns after the Id column and before the Categories column. They will be ignored by the import.

The import button will start the import procedure by processing the excel documents sheet named "Import" or the first one if no "Import" sheet is found. If any parsing errors are found when processing, the log window will display a warning indicating which cell in the excel document that contains an error and the row will be skipped from the import. If a more serious error occurs, the import will be stopped and an error will be displayed in the log window.

This function will print out statistics for the ImageVault server; mainly the amount of Vaults and Assets.

The import tool looks for a sheet named "Import". If this sheet is missing, the first available sheet will be used.

In this sheet you need four columns with the following headers:

Each row beneath these headers represents one media item to import. Formatting (styles, colors, etc.) in the sheet will not have any impact on the import tool.

The full path to the media. This field is mandatory.

The name of the vault in which the media will be stored. If the vault does not exist it will be created. This field is mandatory.

A list of category structures that should be applied to the media item. Any categories that do not exist will be created. This field is optional.

The above category string would apply root categories Apples and Cars to the media item.

You can also specify levels of categories by separating with a forward slash /.

The above category string would apply the following structure to the media item:
- Fruit
- Apples
- Bananas
- Green
- Healthy food

Since the maximum category depth in ImageVault 4 is three levels, any deeper structures will be concatenated with an underscore.

The above category string would apply the following structure to the media item:
- Fruit
- Bananas
- Green_Old

Specify any metadata that should be applied to the item. This field is optional.

Note: If the metadata does not exist, it will create a user metadata of a suitable type for the first value where the definition is needed. If a later item has the same metadata but with another type, the data might not be stored correctly. It's recommended that you create your user datatypes before running the import tool.

Multiple metadata is supported, each metadata name/value pair should be separated by a semicolon (;).

The above metadata string would apply three metadata definitions to the media item:

Did you find it helpful? Yes No

Send feedback
Sorry we couldn't be helpful. Help us improve this article with your feedback.